We love lubricants. Our mission: highest performance and a passion that leaves only one question open: "How can we become even better? We produce our best engine oils with heart and mind and supply the market with individual products from the automotive and industrial sectors. This is exactly why we love everything that tests the limits of what is possible in order to get the best out of it.

Blast off with ROWE - into the world of tomorrow.

Because motorsport forces us to perform at our best!

Because it takes fighting spirit to defeat the best!

Because you to defeat others,
you must first defeat yourself !

Because also on the water records
must be broken.

Because in everything we do,
want to reach the maximum.

Our performance is our promise. We develop the motor oil of tomorrow to perfection and master new challenges through innovative approaches. We combine the highest quality and best performance with innovation and sustainability. This is how we have been developing our lubricants for over 25 years: for you and your car.

Experience now the difference and the best ROWE products ever.

→ Go to our products

With our racing team ROWE RACING we are on the race tracks of the world since 2011.

Our mission: Celebrating success - on the podium and in the laboratory.

Because in our vehicles, the "driving laboratory", we develop HIGHTEC products under the extreme conditions of motor sports. The Nürburgring is our living room, the world our home. One kilometer of the Nordschleife in racing operation corresponds to approx. 20 km of stress in road traffic. The 24 hours at the Nürburgring is one of the toughest races in the world, 150 laps, almost 75,000 km of racing. The knowledge gained there flows into the research and development of our best lubricants and makes our products true champions. ROWE RACING. Nürburgring Winner 2020 at the ADAC 24 hours race.
PreviousNext 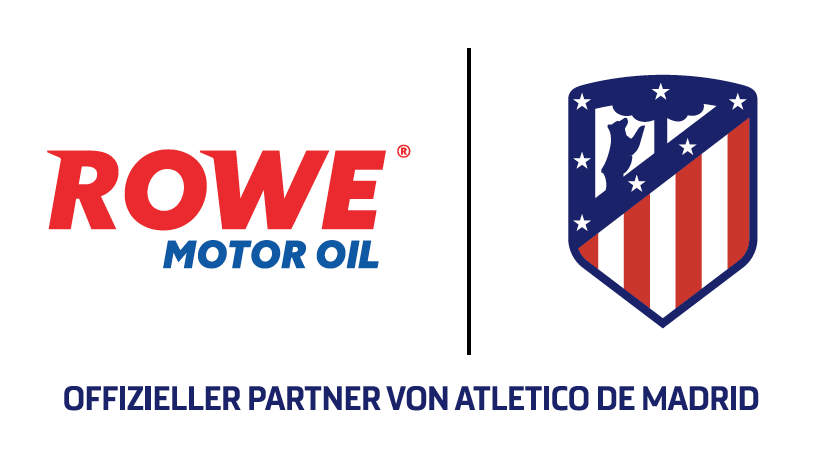 On the ball with the champion of LaLiga.
At the start of the 2020/21 season ROWE became an official partner and sponsor of Atlético Madrid and now has a strong presence in international football. For the time being, the contract with the team from the Spanish capital will run until 2024. The ten-time Spanish champion plays in the highest Spanish division, the Primera División, and is famous well beyond its homeland for passionate play and fierce competitive spirit.

Intensity, authenticity, binding power and ambition are the strengths of BVB. The ROWE brand, which the company now sells in over 90 countries, is also genuine. Authenticity is also reflected in our passion, determination and unconditional commitment, which are also values of the international top club. Due to these common attributes, ROWE MINERALÖLWERK GMBH decided to enter into a partnership with this traditional club at the beginning of the 2017/2018 season.

Sustainability is one of the key concepts of the Rhineland-Palatinate Bundesliga club. As the first climate-neutral club in the German Football League, Mainz 05 stands for central values that are also firmly anchored at ROWE. Authenticity and motivation are also important pillars that unite the 05 with ROWE. The sponsorship in the state capital started with the 2020/21 season. As usual, ROWE is visible on the digital channels, such as the TV-relevant gang, but also in the social media channels.

At the beginning of the 2017/2018 season ROWE MINERALÖLWERK GMBH became premium sponsor of SV Darmstadt 98. The "lilies" reflect ROWE's philosophy - passion, endurance and determination. Our close proximity to Darmstadt and the familiarity of the "Lilien" were decisive reasons for the beginning of the partnership. In the course of this commitment ROWE MINERALÖLWERK GMBH is present in the digital media in addition to TV-relevant advertising volumes.

Close to home and global success - ROWE is involved in sports at all levels. Squash is one of the fastest sports in the world. In addition to individual national and international athletes, ROWE is a long-standing partner and sponsor of the Black & White Racket Club e.V. Worms.

Founded in 1998, the club has been playing regularly for many years in the first squash Bundesliga for the German team championship. In 2011 the team won the championship for the first time and became German team champion. Only two years later the team could bring the title to Worms again. Winning the European Club Championships (2012-2015) 4 times in a row is one of the biggest successes of the Wormser Squashclub and is unique at this tournament.

Not only the Bundesliga team but also individual top athletes who are successfully represented on the PSA Worldtour are supported by ROWE.

ROWE is also committed to water and has been supporting the ROWE PowerBoat team for several years. The team competes in the Formula 2 World and European Championship, in which racing driver Stefan Hagin pilots the racing catamaran, which is around 6 m long, 2.30 m wide and has an output of around 300 hp. The multiple champion Stefan Hagin reached the peak of his career in 2009 with the title of World Champion and was awarded the title of European Champion the following year. In addition to the ROWE PowerBoat Team, the company also supports the F1 ATLANTIC Team, which has already successfully participated in several Formula 1 world championships with the racing driver Duarte Benavente. With ROWE PowerBoat and the F1 ATLANTIC Team the lubricant manufacturer ROWE MINERALÖLWERK GMBH is involved in the most demanding racing series in motorboat racing. The HIGHTEC Racing and HIGHTEC Power Boat motor oils developed by ROWE for racing sports can thus be successfully used in its own team and tested under the toughest conditions.

Since 2013 the successful cooperation between ROWE MINERALÖLWERK GMBH and Jean Pierre Kraemer, who is the face of Europe's most successful Auto YouTube Channel "JP Performance", exists.

With his friendly and relaxed manner, he brings ROWE's products closer to his community and many car fans on all channels.

Racing driver, presenter, motorsport expert: Christian Menzel is one of the faces and greats in motorsport. Winner of the 24H at the Nürburgring 1998 as well as former DTM driver. The partnership between ROWE and the new brand ambassador, who also has a strong presence on the social media channels, has been in place since 2020.

As a co-commentator, he can be heard in various racing series and regularly provides exciting content in his internationally renowned program "Fast Lap" on the Auto Motor Sport Channel. Christian Menzel puts sports cars of all categories through their paces in his series and explores new frontiers.

Sustainability and environmental awareness are a major challenge for any company. Especially if you are a lubricant manufacturer. It's good that we are convinced that you only grow when you challenge yourself.

You can find out more on these pages: 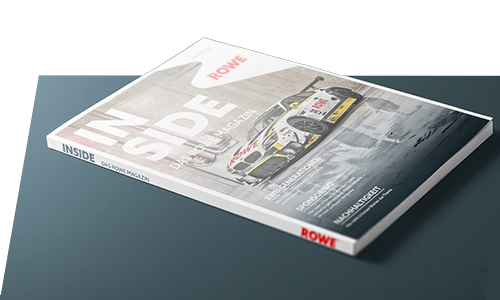 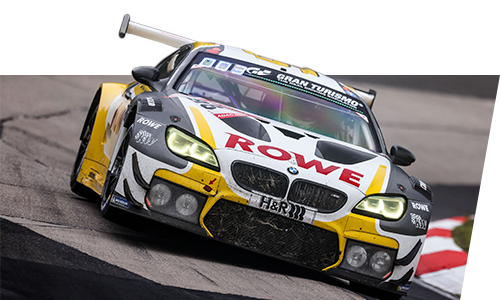 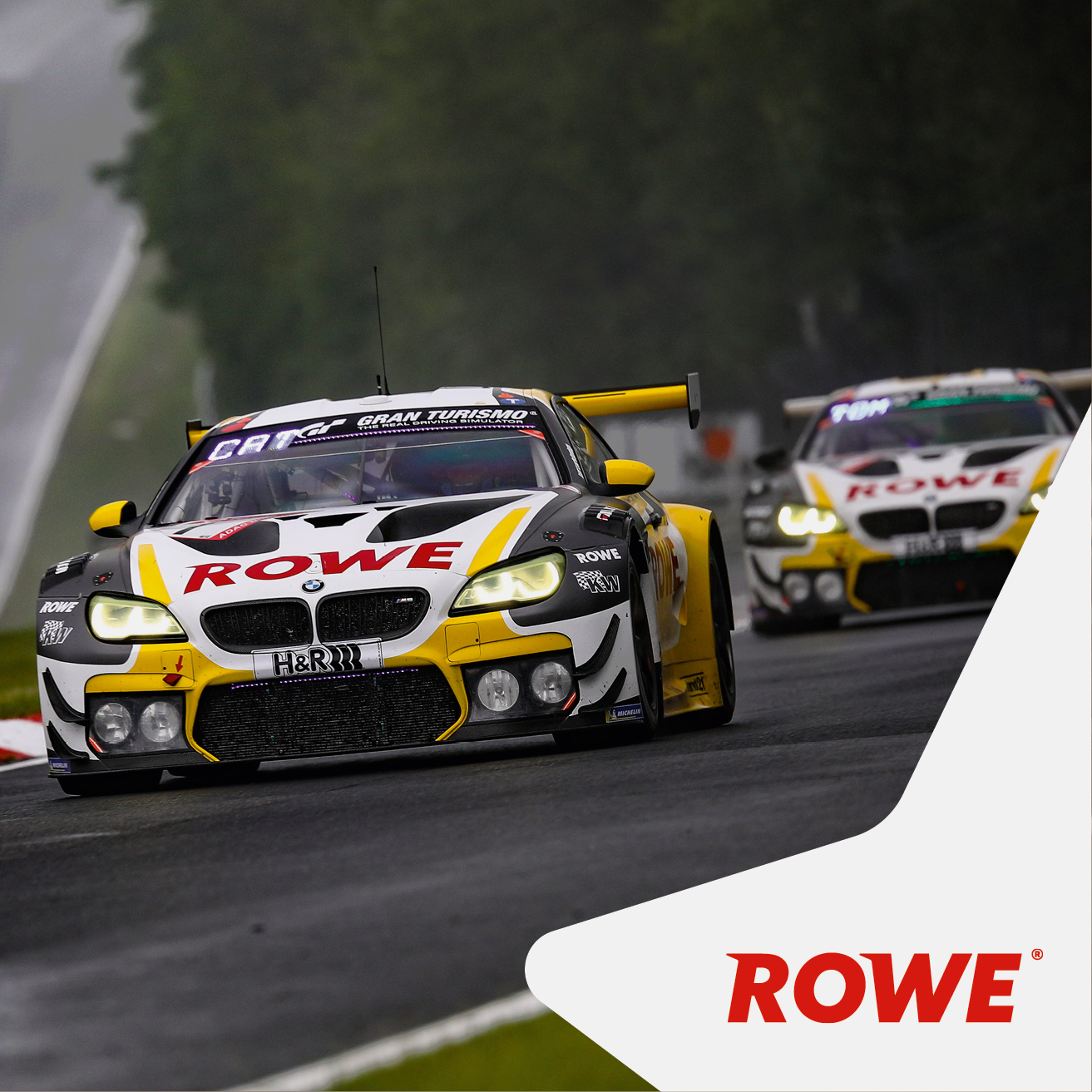 With fantastic team performance, ROWE RACING finished on the podium for the second time in a row at the legendary ADAC 24 Hours ‑ at the… 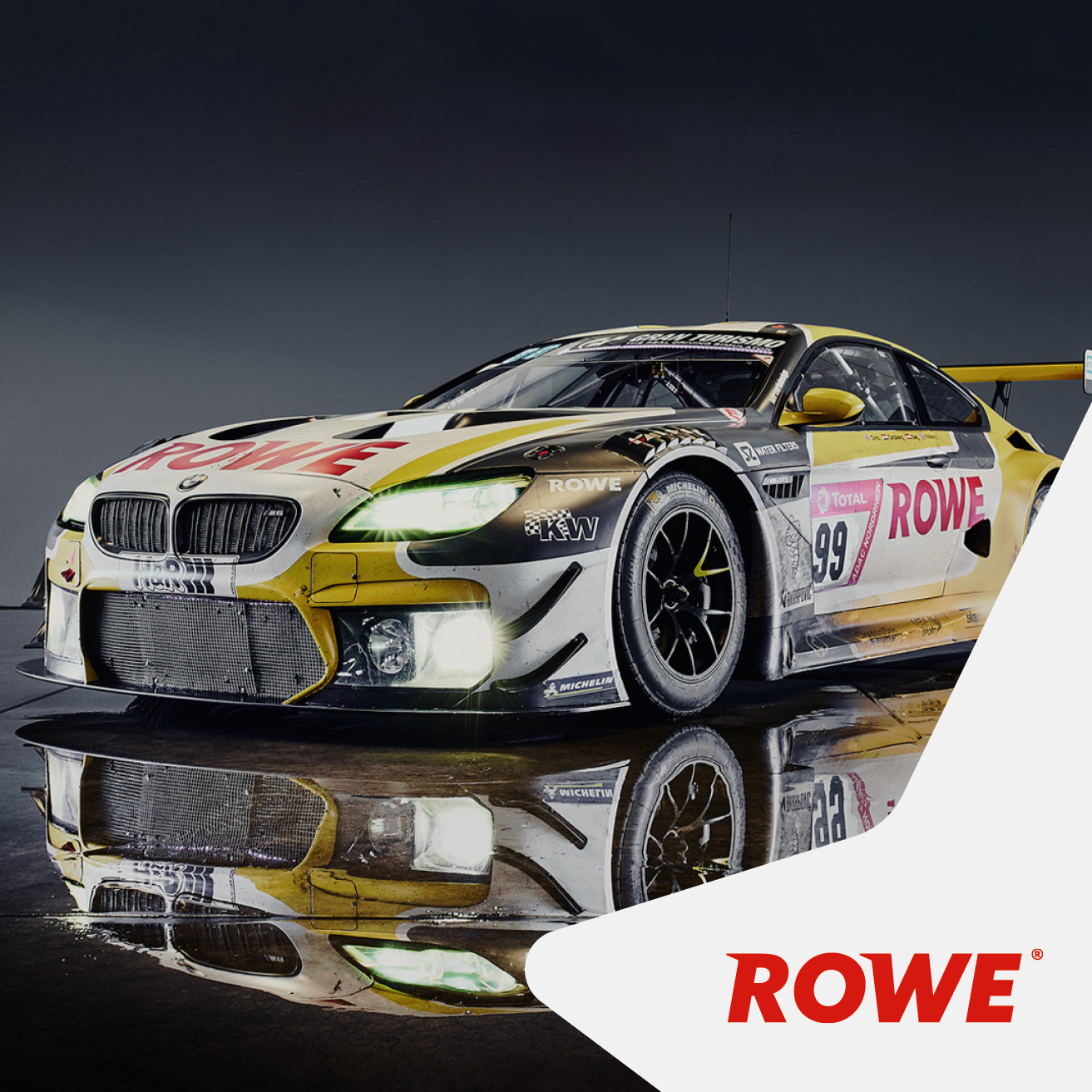 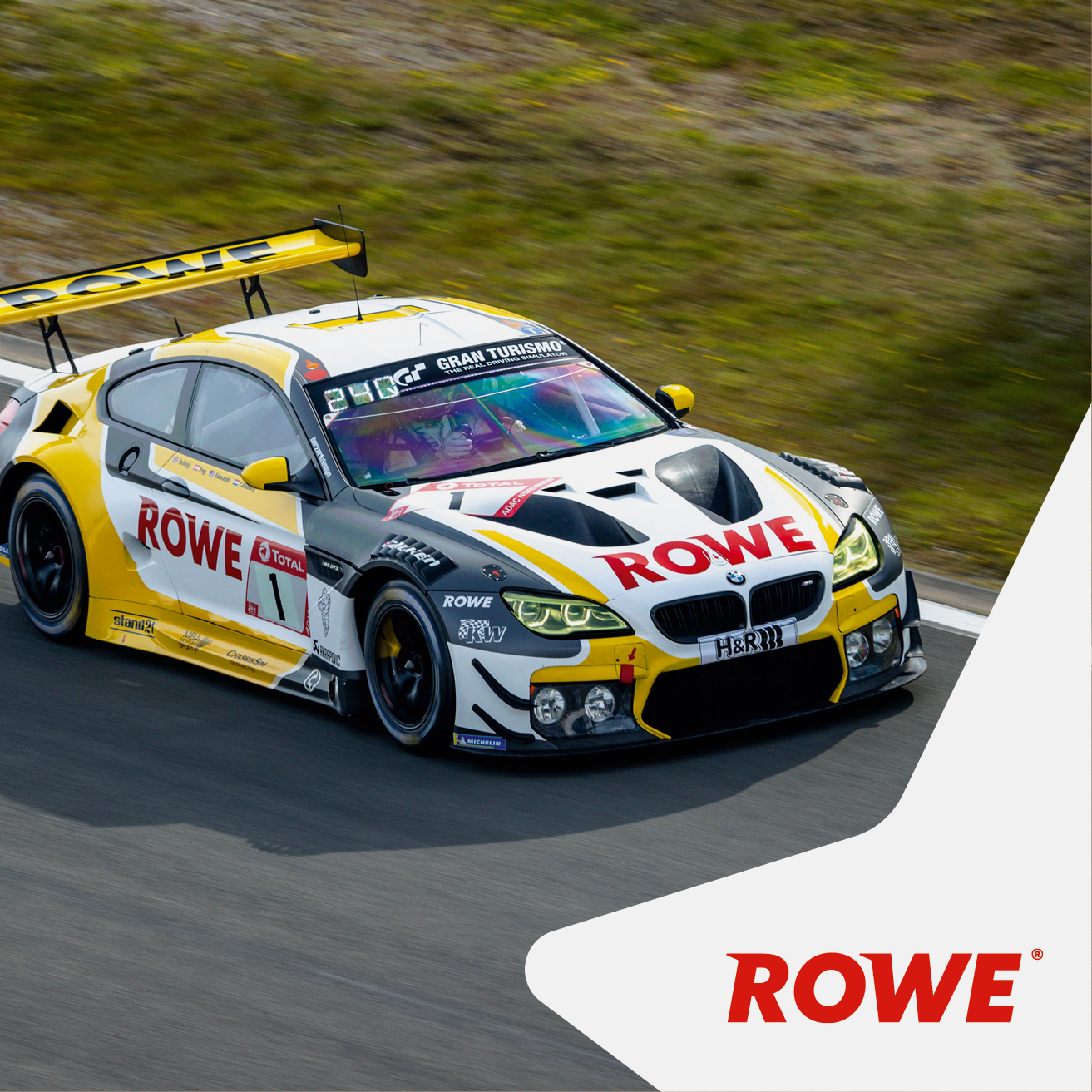 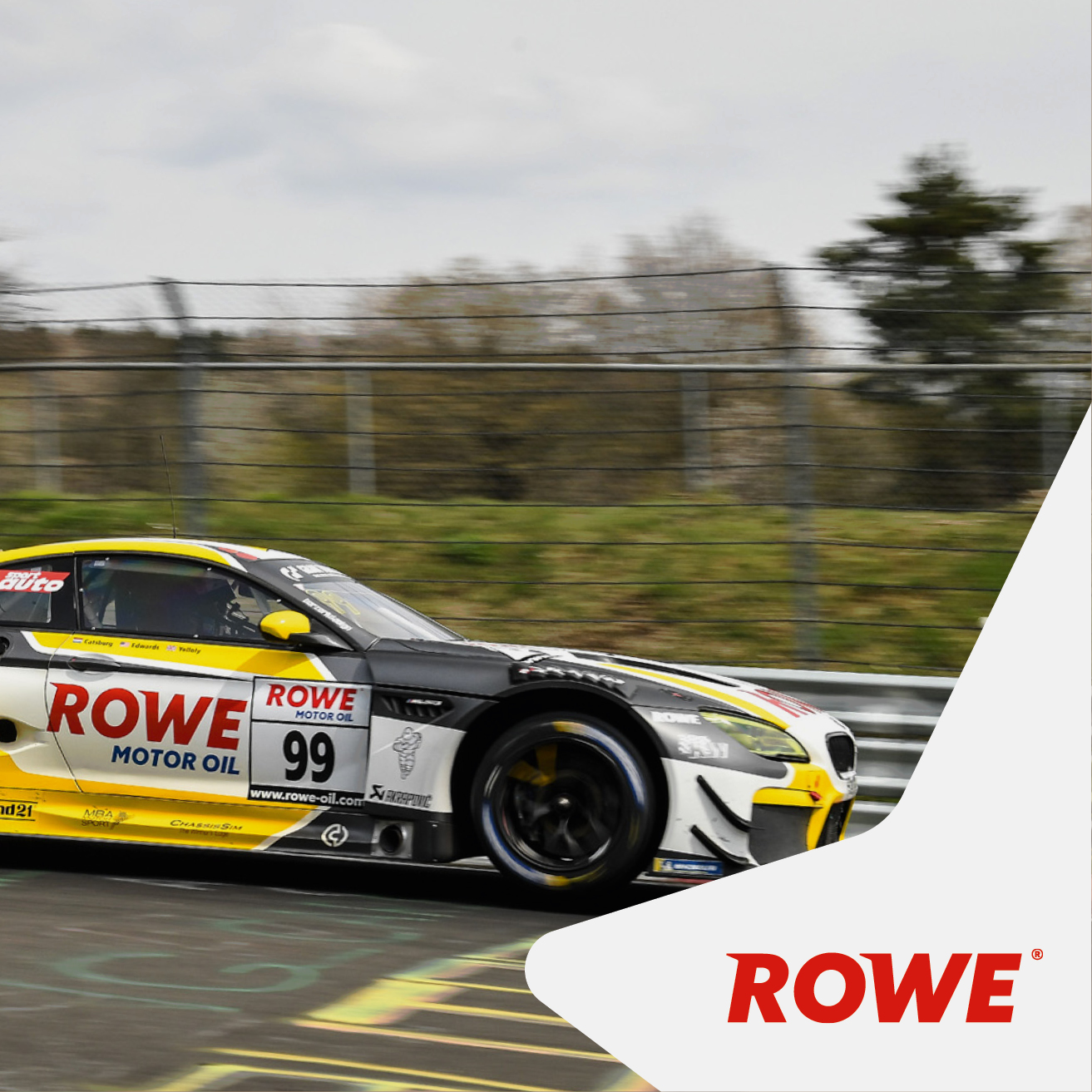 Sheldon van der Linde all set for his race debut for the team from St. Ingbert - again / First kilometres of the season on the Nordschleife…